Boca Raton, Fla — Yesterday, May 9, 2018, Florida Atlantic University’s Business and Economic Polling Initiative released a 1,000 participant poll on Donald Trump’s job performance, the U.S. Senate race, and on Florida’s Gubernatorial race. According to the poll, the most important issues for registered voters in Florida are immigration, healthcare, and the economy, respectively. 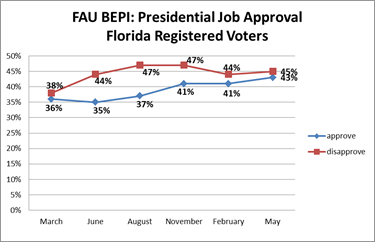 Also in the poll, FAU found that Florida Gubernatorial field is wide open as far as voters are concerned. On the Republican side, 43 percent of respondents were undecided while on the Democratic side, 42 percent were undecided. FAU did not ask about Libertarian candidate Randy Wiseman who was still an active candidate when the polling was done but has since dropped out for health reasons. We will follow up and see if they are more inclusive in future polling of Libertarian Gubernatorial candidate Ricquet Caballero and Bruce Stanley of the Green Party, in addition to other candidates who have not met their narrative. This polling arm of FAU has a long history of excluding qualified candidates from their polling, choosing to focus only on some of the candidate who will appear on the ballot. After the June 22, 2018 qualification period, we hope they will be more inclusive rather than exclusive in their polling so voters and media have a better picture of the political landscape. 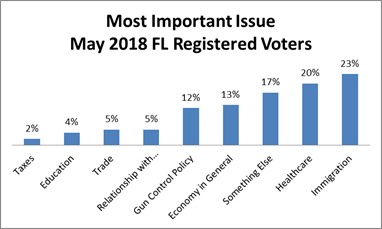 Florida Gov. Rick Scott, who announced he would run for the U.S. Senate last month, has opened up a small four-point lead on U.S. Sen. Bill Nelson, 44 to 40 percent, with 16 percent still undecided, according to the statewide survey by the Florida Atlantic University Business and Economics Polling Initiative (FAU BEPI). However, that’s a six-point swing from a poll taken by FAU in late February, which showed Nelson leading 40 to 38 percent. Among those respondents who said they are very likely to vote in November, the race is still tied at 45 percent.

“The Senate race in Florida continues to be very close and is going to be one of the most expensive and competitive contests in the nation,” said Kevin Wagner, Ph.D., professor of political science at FAU and a research fellow of the Initiative. “President Trump’s approval ratings in Florida are edging up, and if that continues, it could help Rick Scott and other Republicans on the midterm ballot.”

“The race for governor remains wide open in Florida, with large numbers of undecided voters in both races,” said Monica Escaleras, Ph.D., director of the BEPI. “It is not unusual to have so many undecided voters at this early stage, as even the leading candidates are still introducing themselves to much of Florida.”

The survey, which polled 1,000 Florida registered voters May 4-7, was conducted using an online sample supplied by Survey Sampling International using online questionnaires and via an automated telephone platform (IVR) using registered voter lists supplied by Aristotle, Inc. The survey has a margin of error of +/- 3.0 percentage points. Responses for the entire sample were weighted to reflect the statewide distribution of the Florida population. The polling results and full cross-tabulations are available at http://www.business.fau.edu/bepi.