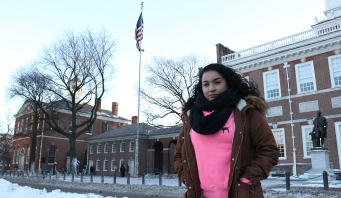 what Americans do every day: exercise her First Amendment right to respond to an opposing viewpoint. For that, campus police detained her, confiscated her political flyers, and told her she has freedom of speech only if JJC gives its approval.

That’s not how the First Amendment works, and that’s why Salazar filed a lawsuit yesterday, January 12, 2017, against JJC. The lawsuit is the latest for the Foundation for Individual Rights in Education’s Million Voices Campaign, which aims to free the voices of one million students by striking down unconstitutional speech codes nationwide.

On Nov. 28, after seeing members of a conservative student group distributing anti-socialism materials on campus, Salazar decided to provide an alternate viewpoint by distributing flyers from the Party for Socialism and Liberation that read “Shut Down Capitalism.” Granted, the content of her flyers is incorrect and offensive to capitalists, it is the lawsuit’s contention that it was still her right to distribute the flyers and voice her opinion. After being reported by campus staff, she was detained by JJC police for approximately 40 minutes, interrogated at the campus police station, and told she could not distribute her flyers because of the “political climate of the country.”

When Salazar asked the officers detaining her about her free speech rights, she said one JJC police officer told her, “If you want to go ahead and post your flyers and burn your crosses, you have to get it approved” by the school. Her flyers were confiscated to ensure that she did not distribute them on campus.

“Debating the merits of economic and governmental systems is core political speech,” said FIRE Director of Litigation Marieke Tuthill Beck-Coon. “Campus police got it backward: The current ‘political climate’ is a reason for more speech, not censorship. If tense political times justified restricting political speech, the First Amendment would be pointless.”

FIRE wrote to JJC President Judy Mitchell on Dec. 4 to demand that the college comply with its legal obligations as a public institution bound by the First Amendment. FIRE did not receive a response to its letter.

“I should be able to express my political beliefs on campus without being detained,” said Salazar. “JCC didn’t just threaten my freedom of speech, but the freedom of speech of every student on that campus. If we can’t have political discussions on a college campus, then where can we have them?”

As part of her lawsuit, Salazar challenges the constitutionality of JJC’s “Free Speech Area” policy. The policy restricts expressive activity to one small, indoor area of campus, requires students to request use of the area five business days in advance, requires students to disclose the purpose of their speech, allows for only two people to use the area at a time, and requires students to remain behind a table. If a student wants to distribute literature while in the area, he or she also has to get the materials approved by administrators ahead of time.

The lawsuit was filed in partnership with FIRE Legal Network member and former president of the First Amendment Lawyers Association Wayne Giampietro of Poltrock & Giampietro in Chicago. Giampietro serves as co-counsel with FIRE in the case.
“A public college should be teaching its students the existence and value of the freedoms protected by our federal and state constitutions, not violating those freedoms,” said Giampietro. “The First Amendment protects our most cherished right to speak freely on political matters. It is deplorable that public school employees, paid with our tax money, would detain, interrogate, and seize political materials from a student who is attempting to exercise that right.”
If you are a student who has been censored on campus, FIRE and its Legal Network partners stand ready to protect your First Amendment rights in court. Students interested in submitting their case to FIRE’s Million Voices Campaign may do so through FIRE’s online case submission form. Attorneys interested in joining FIRE’s Legal Network should apply on FIRE’s website.
The Foundation for Individual Rights in Education (FIRE) is a nonpartisan, nonprofit organization dedicated to defending liberty, freedom of speech, due process, academic freedom, legal equality, and freedom of conscience on America’s college campuses.

Like Loading...
‹ Commentary: More political theater as the federal government continues to erode our freedoms
Case Appealed to U.S. Supreme Court Asks If All 50 States Must Comply with U.S. Constitution’s Excessive Fines Clause ›