Oscar® winner Charlize Theron comes out today, July 28, 2017, with her co-produced ‘Atomic Blonde‘ spy movie. The movie is rated “R” mostly due to the violence and perhaps a couple quick sexual situations with her French colleague DelphineLasalle (played by Sofia Boutella). With an estimated $30 million budget, they did an excellent job as the movie feels more like a $60-80 million production budget.

‘Atomic Blonde’ takes place in 1989 Berlin just before the wall came down. Theron plays the role of MI6 agent Lorraine Broughton and does a good job overall. The storyline is a bit tired: “There is a list of spies out in the open that she has been assigned to recover.” That said, if you’re an action junky, you’ll love this one. The violent scenes are exceptional, soundly topping the blood & guts of Tarantino’s “Kill Bill.”

Broughton needs to get the list out of East Berlin and is partnered up with David Percival (James McAvoy) who is the station chief there. As with any spy movie, there are a seemingly endless number of people trying to stop her and she of course succeeds…or does she? There are a couple twists at the end of the flick.

Overall, the movie was average with a tired storyline so I was not overly excited about ‘Atomic Blonde’. I guess, from the onset, it was hard for me to care about the characters which is likely affecting my judgment. But if you’re into near non-stop action, girls beating up boys, and need a quick lesbian romp scene to get you through the night, then, by all means, go see it. Oh, it also includes a Top 40 1980s soundtrack that would have made Casey Kasem proud. 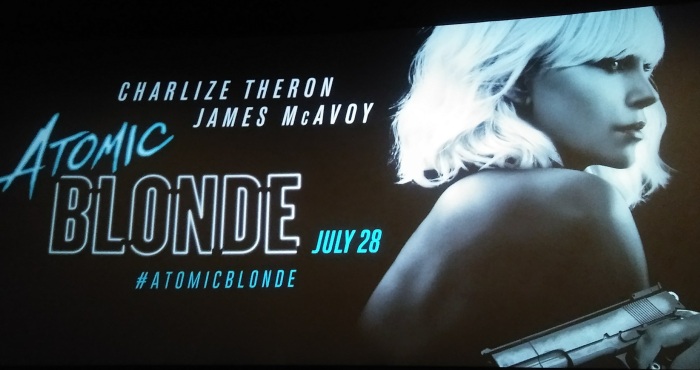 Like Loading...
‹ Three Iowa heroin and Fentanyl dealers sentenced in death of one while thousands of doctors remain free in deaths of 15,000 people each year
Libertarians against Boynton Beach renewing their red light camera program ›