Home › Business › Americans for Prosperity’s Florida legislative scorecard is out — how did your elected official do?

Americans for Prosperity’s Florida legislative scorecard is out — how did your elected official do?

Yesterday, July 25, 2017, Americans for Prosperity Florida (AFP Florida) issued their 2017 Florida Legislative Economic Freedom Scorecard, rating all the Florida State Senators and Florida State Representatives. The rating system was based on votes for or against economic freedom of the individual and business. Related were votes cast for or against corporate welfare which AFP Florida is strongly against. 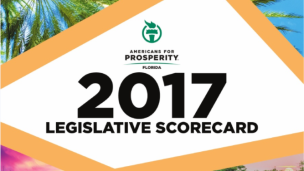 So, while AFP Florida may seem bias towards Republicans in this scorecard, they fought hard against many Republicans in the Florida Legislature this past session as many were willing to give in on corporate welfare. AFP Florida took a lot of flack and stood up for their principles of economic freedom.

The scorecard should not be the end all be all for a voter to decide for whom to vote; however. For example, although Palm Beach County State Senator Clemens received the worst economic freedom score, he has been good on some of the social issues such as medical marijuana, etc. We look forward to the day when more libertarian-minded candidates make it onto the ballot, get fair media coverage and are voted into the Florida Legislature to bridge that gap found with so many elected officials.

Like Loading...
‹ 4 Resorts That Cater To Triathletes
Three Iowa heroin and Fentanyl dealers sentenced in death of one while thousands of doctors remain free in deaths of 15,000 people each year ›