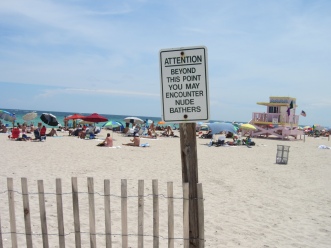 and even though a clothing optional beach was not on their original agenda, it became an add-on for the meeting. Due to the item not being on the original agenda, proponents for a clothing optional beach were not given a voice at the meeting. The council voted to not recommend designating a section of Gulfstream Park to be clothing optional. The issue will now likely go to the Palm Beach County Commission unless the TDC chooses to hold off until it reviews information they did not consider during yesterday’s meeting.

VisitFlorida, the State of Florida’s tourism arm, lists clothing optional recreation areas in Florida so it is odd why the TDC would be against having a family-friendly clothing optional beach in Palm Beach County. Inquiries to TDC’s executive director went unanswered as to why the 20-page economic impact study was not given to board members for them to consider prior to their vote.

While Florida is the “nudist capital” of North America, the county has no beaches set aside for that purpose pushing tourism dollars north (to Blind Creek Beach) and south to Haulover Beach in Sunny Isles. Florida has 34 nudist resorts with 5,100 rooms available at those resorts. Overall, the nudism industry is responsible for adding $7.4 billion to Florida’s economy annually in direct and indirect impact. $4 billion can be attributed directly to the nudism industry in Florida each year. Only a very small portion of those dollars come from Palm Beach County’s only nudist area, Sunsport Gardens out west in Loxahatchee Grove.

Palm Beach Naturists, Inc., a local non-profit that formed in April 2018, is looking to help the county realize additional tourism dollars in both direct and indirect benefits. The bed tax for the county would benefit substantially while restaurants, grocery stores, and conveniences stores would benefit as well.

Public opinion is turning in Palm Beach Naturists’ favor as well according to polls. A 2015 Zogby poll found that 73 percent of Floridians agree that so long as an area of beach has been set aside for the purpose of being clothing optional and it is properly posted, that such a beach should exist for public use. A less scientific survey of Palm Beachers found that 66 percent of Palm Beach County residents agreed that so long as there is proper signage, a clothing optional beach should exist in the county. In case politicians are worried about their public image regarding their vote for such a beach, the same survey found that 87 percent of respondents would either support a candidate or their decision on the beach would have no effect on their vote for any particular candidate.

We will keep you posted on future developments as to when Palm Beach County residents will be able to enjoy their own family friendly clothing optional beach.

Like Loading...
‹ Go light, mid-size or large? Criteria to consider before buying a private jet
Increasing Demand for Vegan Diet – Research and Markets ›