Boynton Beach, Fla — What was originally the Palm Beach County Freedom Beach Initiative has morphed into what is now known as Palm Beach Naturists (PB Naturists). The group has now incorporated and is seeking non-profit status with the IRS for the purpose of re-establishing and maintaining at least one family-friendly clothing-optional beach in Palm Beach County, Florida. The group expects to have a website up and running within the next two weeks and interest on their new Facebook page has exceeded 400 followers.

Although not part of the group’s plan, news of the proposal leaked out to the local media which covered the proposal fairly. Public comments on those media pages where the proposal was mentioned received 4 to 1 positive comments. This sentiment seems to concur with a 2015 NEF Zogby Poll which found that 65 percent of Floridians support nude sunbathing, 57 percent of Floridians support a section set aside at public beaches for clothing-optional recreation, and 69 percent supported state parks setting aside a section for clothing-optional purposes.

PB Naturists has identified eight public beaches in the county which could meet their goal of establishing at least one family-friendly clothing-optional beach. The group says there are thousands of Palm Beach County residents who are forced to recreate nude in private or need to drive an hour south to Haulover Beach in Sunny Isles or Blind Creek Beach in Fort Pierce. Out in Loxahatchee, Palm Beach County residents can enjoy Sunsport Gardens which has been a long-time option, but many want to be nude at the beach and want to do so without fear of unlawful arrest.

Many people do not realize that for so long as an area has been designated to be clothing optional, it is completely legal in Florida to be nude in that area as long as no sexual activity is taking place. This is what PB Naturists is working towards — a family-friendly, clothing-optional beach for Palm Beachers and tourists to enjoy.

According to the Supreme Court of Florida, “Proof of mere nudity or exposure is not sufficient to sustain a conviction”. Conviction under FS 800.03 requires both the intent to perform, and the actual performance in a public place of, a “vulgar, indecent, lewd or lascivious act” With regard to this statute these are equivalent terms defining an act demonstrating “an unlawful indulgence in lust or a wicked, lustful, unchaste, licentious or sensual intent on the part of the person doing the act.” – Supreme Court of Florida, Standard Jury Instructions, No: 89,771; July 10, 1997 (Synopsis with quotation of relevant text)

Additionally, according to Florida Statute 800.03, PB Naturists seems to be correct. The statute reads, “It is unlawful to expose or exhibit one’s sexual organs in public… in a vulgar or indecent manner, or to be naked in public except in any place provided or set apart for that purpose.”

Having at least one family-friendly clothing-optional beach in Palm Beach County would bring in tourism dollars. At Haulover, parking revenue alone skyrocketed after the beach added a clothing-optional section not including the additional revenue to hotels, restaurants and the county government through the “bed tax.” Clothing-optional recreational tourism brings well in excess of $4 billion to Florida which Palm Beach County is sending out to other counties. That number jumps to $7.4 million when one factors in direct and indirect expenditures by nudist vistors to Florida. When many people travel, they seek out clothing-optional resorts and beaches — especially Europeans.

Yesterday, June 2, 2017, the group met with officials at John D. MacArthur Beach State Park to move forward with the idea of re-establishing a clothing optional beach there. PB Naturists will be sending a formal proposal to State Park officials next week. MacArthur Park once had a nude beach which went away after the land was donated from MacArthur to the State of Florida.

We will keep you updated on the progress for a family-friendly clothing-optional beach in Palm Beach County, so make sure to subscribe for free! 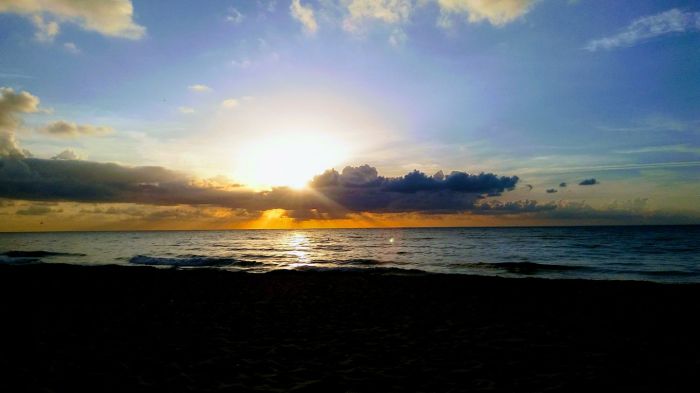 Sunrise at Gulfstream Park which is one of eight beaches identified by PB Naturists as a potential location for a family-friendly, clothing-optional beach.