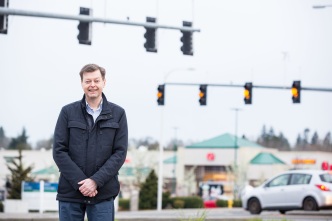 prohibiting Oregon from penalizing Mats Järlström for discussing the timing of stop lights or for calling himself an engineer. The order, which was agreed to by the state, means that Järlström is free to exercise his First Amendment rights to discuss his traffic light theories without first obtaining an Oregon professional engineer license.

Judge Anna J. Brown of the U.S. District Court for the District of Oregon issued the order a month after Järlström sued the Oregon State Board of Examiners for Engineering and Land Surveying. The board had previously fined him $500 for publicly suggesting that yellow lights should last longer to accommodate cars making turns.

Read the order
Read more about the lawsuit

Under yesterday’s order, Järlström will be free to talk about his theories for the rest of the case. The order states Järlström “may study, communicate publicly about, and communicate privately about his theories relating to traffic lights throughout the pendency of this litigation.” He also “may describe himself publicly and privately using the word ‘engineer.’” In the meantime, the case will work its way through the courts.

“You don’t need a permission slip to criticize the government,” said IJ Attorney Wesley Hottot, who also represents Järlström, “and while Mats now has the protection of a court order, Oregon’s unconstitutional laws still remain in force. We look forward to securing a final ruling from the federal courts that vindicates the rights of all Oregonians.”

“I’m thrilled to be free to start sharing my ideas,” Järlström said. “From the beginning, that’s all I’ve wanted to do. Concerned citizens cannot be threatened with fines simply for contacting the government with concerns about road safety.”