Home › Business › Since 2012, Warren Buffett has only contributed to Democrats, with the exception of one Republican

Since 2012, Warren Buffett has only contributed to Democrats, with the exception of one Republican

From 2012 through 2016, billionaire investor Warren Buffett has only contributed to Democrats 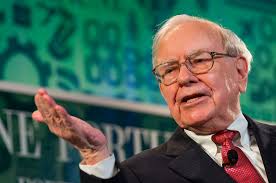 with the curious exception to Republican Scott Rigell. Interestingly, Rigell was one of few establishment types that endorsed Libertarian Party presidential nominee Gary Johnson in 2016. This could have been because Rigell was leaving Capitol Hill and decided to exercise his conscious rather than goose step with other Republicans backing Donald Trump, the Republican Party’s presidential nominee. Rigell received $5,100 in campaign contributions from Buffett in 2012 and 2013.

More interesting, in October 2016, Buffett cut several small checks (all under $1,000) to the DNC Services Corporation – either in all. This is a stark contrast to his generous political contributions to the $100,200 he paid to the Democratic Congressional Campaign Committee and the Democratic Senatorial Campaign Committee in three checks in 2016.

Which brings us back to that odd contribution to a Republican. As it turns out, in 2012, Buffett had a fondness for Rigell, as Rigell was the only Congressperson to answer Buffett’s challenge to reduce the federal debt. Mr. Buffett invited Rigell to visit his place in Omaha, Nebraska after learning that Rigell had voluntarily been contributing 15% of his Congressional salary toward the national debt, prior to Mr. Buffett’s offer to match any GOP donations toward the debt.

Like Loading...
‹ Are Boca Raton taxpayers ready to spend $14 million over appraised value for a golf course?
Bottleneckers are killing the American Dream ›