Florida Libertarians to gather in Cocoa Beach next weekend

The Libertarian Party of Florida will hold its 2017 state convention in Cocoa Beach, 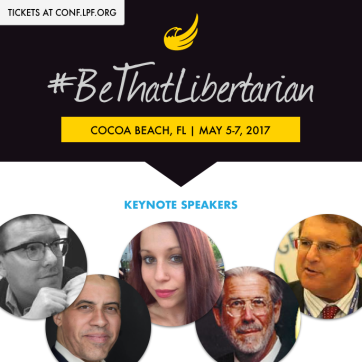 The convention will begin late Friday, May 5, 2017, with a speech by Bernard Von Nothaus followed with a Luau on the beach. The business meeting will commence the following morning with keynote speaker, Tom Regnier who is a legend in Libertarian Party circles for his work on ballot access and the Constitution.

The business meeting will result in an election of leaders for the Libertarian Party, for which, there are many offices up for election. There will be various breakout sessions available for attendees to learn more about the Libertarian Party of Florida as well as political data and how best to promote the party. Alison Foxall will be doing a session on party efficiency and process. Joshua Folsom will instruct attendees how best to leverage voter data. Florida Gubernatorial candidate Randy Wiseman will hold a session on party unity. Another breakout session will be by Hesham El-Meligy from Muslims For Liberty.

Make certain to freely subscribe to the Palm Beach Free Press as we will be offering regular updates on the convention. Attendance to the convention is free for the business meeting and a few other events; however, to see some of the speakers one will need to pay. See the convention website for details.