Journalist and novelist, Joe Quirk, co-author of Seasteading: How Floating Nations Will Restore the Environment, Enrich the Poor, Cure the Sick, and Liberate Humanity from Politicians, is easily the most interesting person at any cocktail party he attends.

Seasteading, the concept of building freer societies upon the world’s oceans, is one of those so- 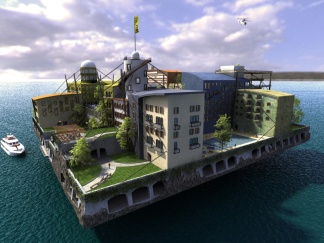 It isn’t hard to imagine Mr. Quirk, in between introductions and hor d’oeuvres, capturing party goers’ curiosity when he announces his occupation as “Aquapreneur,” his neologism for business savvy folks looking toward the ocean.

Mr. Quirk’s almost monotone voice oddly resonates with a confidence of having answered thoroughly all objections. This isn’t some passing interest for him. It’s an evangelical undertaking happening right now.

Seasteading, the concept of building freer societies upon unincorporated parts of the world’s oceans, is one of those so-crazy-it-just-might-work ideas within liberty/stateless circles. Long discussed, presented, talked about, mulled over, most cranks like myself mentally pocketed the idea years ago. Compelling enough, definitely, but it seemed wishful, immediately impractical.

And it’s such an expansive, vast subject, a gigantic rabbit hole of statistics and science and philosophy, seasteading requires an able storyteller. Such a person must reemerge with verve enough to capture our heart.

The concept of seasteading really begins in earnest with Patri Friedman, grandson of Nobel Laureate Milton Friedman. The third generation Friedman doesn’t shy away from his famous lineage, which also includes anarcho-capitalist philosopher father David Friedman. In fact, Mr. Friedman the younger uses all three men as a metaphor for the seasteading idea itself.

The Seasteading Institute was a giant middle finger to the state, at least at first.

Whereas grandfather Milton Friedman hoped to work within the world’s largest capitalist system, urging it toward ever-more free market ends, father David Friedman carried the intellectual ball to its logical conclusion: anything governments do, private, voluntary markets do better. Patri Friedman, tired of the endless salon, the debates, preferred direct action. It does seem everything about Mr. Friedman means building rather than debate.

Mr. Friedman describes his family philosophy as an intuition. Summers with his father meant a house filled with science fiction books, conversations about history and current events, trips to Medieval festivals. An environment full of ideas, often well outside the mainstream, including overt atheism (which was not then considered chic), allowed Mr. Friedman room to choose his interests, to develop himself.

The obvious career path, nearly resisted by his father, was academia, especially economics. But Mr. Friedman fell in love with technology, computers, code. Though he doesn’t describe himself as a maker in the hands-on sense, there is an aspect of digital technology that allows Mr. Friedman to build things with his mind. Seasteading is that very intellectual exercise, combining the ideas of his youth with a chance to impact the real world of things.

It was a flash immediately.

If we could have thousands of seasteads, we’d unleash an evolutionary market process among governance providers.

The Seasteading Institute was a giant middle finger to the state, at least at first. Abandoned ocean oil platforms were commandeered under its name. Cheeky write-ups in any manner of national magazines often commented on the project’s militancy and its stridency. That was fine for the red meat base, segments of the liberty movement still young and daredevil, but it didn’t do much for serious investors (Mr. Thiel notwithstanding).

For Seasteading to be taken seriously, it was clear that Mr. Friedman needed a spokesperson to sell the concept to a wider audience. Mr. Quirk, as it happened, was just six weeks off of an ocean cruise and attending his tenth Burning Man festival on Nevada’s Black Rock Playa. Besides providing an ironic setting for the  iconic seasteading duo to meet, Burning Man also has been poo-pooed as a sham, a hipster get down, a fanciful but ultimately unworkable idea in the long run.

Each year, nearly one hundred thousand visitors from all over the globe descend upon that large, flat, dusty patch to reinvent society for a week. Drugs and nudity abound, but they do not take away from the deeper channels of expression. Visionaries and storytellers are attracted to its anarchic spirit.

Mr. Quirk describes the serendipity of his meeting with Patri Friedman:

A decade of watching Burning Man develop had taught me that rules for society evolve in unpredictable ways given their initial parameters. My week on a cruise ship showed me that de-facto self-governing cities floating on the sea can be run better than the coastal cities of rich nations. When I learned about seasteading, I instantly understood that permanently floating cities on the high seas was technologically possible, and that start-up nano-nations were legally possible.

If we could have thousands of seasteads, we’d unleash an evolutionary market process among governance providers, and unpredictable marvels of governance would emerge if only people could choose among them. I realized seasteads would not be properly characterized as nation-states, because they would be founded not on government force but on voluntary choice.

We have almost half the world’s surface to experiment with new societies and unleash innovation and freedom. I decided this approaching technology was too important to be an obscure debate topic among Silicon Valley bloggers. We needed to make it happen soon. It had to be a mainstream topic of conversation in popular media. I offered to write a popular book about seasteading so everybody could bring their creativity to it.” (interview with author)

Indeed, their fateful meeting even crept eventually into The Seasteading Institute’s logo as an homage to The Man of Burning Man. The pair set about building a legitimate non-profit institute of science and discovery. Both men travelled the world, meeting with movers and shakers, delivering lectures to nearly anyone who’d listen, and regularly speaking with the press. The idea moved along so well, the institute commissioned an X-Prize-like design competition to both spur interest and to engage the best engineering minds. The mock-ups alone are worth a visit to the website. They’re nothing short of spectacular.

No Longer Just A Thought Experiment

The engineering is more than developed enough to begin serious exploration of floating cities, micronations. The idea has moved beyond the salon.

Quirk and Friedman’s Seasteading is not the obvious read for those concerned with the future of freer societies. Close to 200 governments rest on terra firma, tending to the hopes and desires of seven billion people. That ratio begs for change. And if people desire change, they’re effectively locked in the tax farm of their birthplace. Few countries permit anything like free migration, fewer still encourage it.

The Seasteading Institute has inked a deal with French Polynesia for a trial city off their shores. It’s happening.

Gallup polled adult residents in 135 countries, and sixteen percent of their populations wish to leave their places of birth permanently. That translates to seven hundred million people. That’s the equivalent of two United States.

Really, what is the United States other than a kind of oasis of government experimentalism? Hardly perfect, during the late 18th century, the US could be thought of as an almost island nation, a respite for visionaries and storytellers. Outcasts. Criminals. Tax avoiders. Revolutionaries. It put pressure upon other nations just be existing, surely contributing to the hastening of monarchical decline and renewed interest in individual rights (at least rhetorically).

British historian Donald Cardwell described a version of the above tension. Over time, governments feel that they don’t have to compete over citizens, a kind of stagnation takes hold. Other areas of life seem to improve, to innovate, but governments appear less inclined. And as interests grab the machinery of the state, governments are even less inclined to change. Reason suggests there are more than 200 ways to organize humans, and that perhaps the best ideas are being held back, retarded by Cardwell’s Law.

Seasteading lays out in four compelling parts how, right now, researchers and scientists are working on the concept’s logistical problems with an eye toward solving environmental problems, poverty, and the stagnation of medical advancement. Seasteading is a brisk, easy read that leaves readers struck by the possibilities. Each section profiles the important players. It shows how every gummed up problem, every stinking barrier to advancement lies at the feet of current political structures (it made me boil with anger when I read about how medical potential is being stifled).

The logistics alone celebrate interdisciplinary study, from basic biology to philosophy to law to international relations.

The good news, however, is The Seasteading Institute has inked a deal just this year with French Polynesia for a trial city off their shores, a testimonial to Patri Friedman’s exhortation to debate less and build more. It’s happening.

SPREAD TO THE UNIVERSITIES

Regular FEE readers include Political Science professors at the university level. I can think of literally no other book that would spark the imagination of undergrad students. Along with learning the ins and outs of comparative governments, why not assign Quirk and Friedman’s fantastic new book, Seasteading, and have groups of students set about creating their own White Papers. The logistics alone will celebrate interdisciplinary study, from basic biology to philosophy to law to international relations, just to name a few.

For sure the concept of seasteading is a bit of an ideological Rorschach test, and that is at least a considerable part of its charm. Quirk and Friedman have their own ideas but never presume to know what is best for everyone. Instead, they’re leaving humanity with the intellectual scaffolding to challenge existing orders. With seven hundred million people dreaming of life somewhere else, crying in the darkness of what amounts to a grand DNA lottery (most of us just happened to land on this side of the gated community), the time to take Quirk and Friedman seriously is right now.

Edward Kelso is the author of The Market Anarchist, to be published Fall 2017.

Like Loading...
‹ DOJ Inspector General Bombshell: Many Forfeitures Do Not Advance or Relate to Criminal Investigations
Flagler College sees the error of their ways concerning student free speech ›