Boynton Beach, Fla — Today, January 12, 2017, the Florida Elections Commission will receive a notarized complaint of alleged campaign finance law violations against Delray Beach resident Rob Long. We wrote about this issue shortly after the November 2016 election; however, no official action was taken until now. Long’s opponent, Karl Dickey in the race for Palm Beach County Soil & Water Conservation District, Group 4, filed the complaint after trying to get authorities to investigate on their own without success. Long is scheduled to be sworn in on January 24, 2017, as he defeated Dickey and David Self in the election.

In the complaint, Dickey alleges, “Candidate Long was holding fundraisers, bringing in money to his campaign, and expensed money for his campaign without filing any campaign reports until after the election.”

Dickey told the Palm Beach Free Press this morning, “It is amazing the authorities would not act on their own after I notified three different government agencies of the campaign finance violations. These are egregious violations of Florida law which put me and David Self [Long’s opponents] at a distinct disadvantage. Had we known Long was actively raising money, buying Facebook ads, and putting out road signs to promote his candidacy, we likely would have been more aggressive in our campaigns. My hope is that the Florida Elections Commission fully investigates the matter and follow the law. By Long’s own late filings, he has admitted to receiving and expending money in his campaign while not filing until weeks after the election was over.”

Specifically, Dickey is alleging that Long was raising money from the public and created expenses for his campaign without filing any treasurer’s reports as required by Florida election law. Additionally, Long had campaign road signs without the required language, including the “paid political advertisement” disclaimer which tells the public who is paying for the signs. According to the Palm Beach County Supervisor of Elections website, Long did not 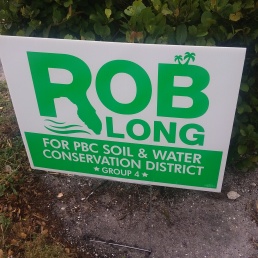 file any treasurer’s reports until November 21, 2016. This is a violation of Florida Statute 106.07 which reads, “Failure of the treasurer of a candidate or political committee to file regular reports of all contributions received, and all expenditures made, by or on behalf of the candidate or political committee.” Long apparently is on the hook for 25% of the campaign’s total receipts and expenditures, while the reports immediately preceding the general election, the fine is $500 per day.

Like Loading...
‹ Missouri School District Agrees to Halt Bible Study Bribing Students with Free Donuts
ARIANA GRANDE AND JOHN LEGEND TO PERFORM OSCAR® AND GRAMMY®-WINNING SONG “BEAUTY AND THE BEAST” AS THE TITLE TRACK FOR DISNEY’S UPCOMING SOUNDTRACK TO THE LIVE-ACTION ADAPTATION OF THE ANIMATED CLASSIC ›