Home › Politics › Johnson-Weld Campaign: The Democratic Media Machine is at it again…..false stories

Johnson-Weld Campaign: The Democratic Media Machine is at it again…..false stories 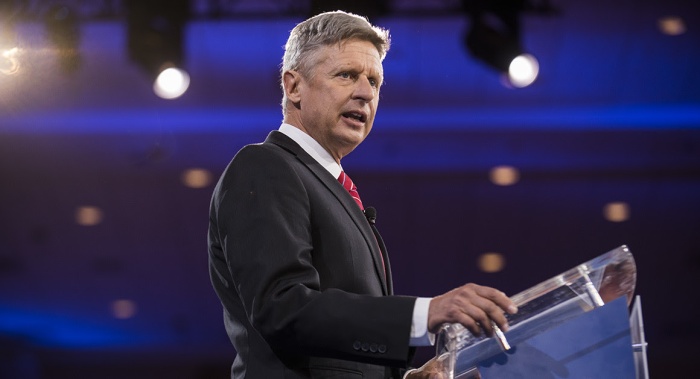 “Several web sites and media outlets have seized upon Governor Bill Weld’s statement from a news conference Tuesday in Boston to jump to conclusions that are wishful thinking, rather than reality.

“Led by Occupy Democrats, a well-known mouthpiece for the left,  the sensationalists, and wishful thinkers are re-writing Gov. Weld’s forceful condemnation of Donald Trump into a suggestion that voters should support Hillary Clinton. That is absurd.

“Governor Weld and Governor Johnson are campaigning nonstop, with rallies and appearances scheduled over the next few days across the country from Alaska to Cincinnati, and are fully committed to giving voters the third choice they deserve in this election.

“Any suggestion to the contrary is the product of active imaginations and partisans in both the Republican and Democrat camps who see how many independents, millennials and other disenfranchised voters are looking to the Johnson-Weld ticket as a vote they can cast in good conscience.

“Governor Weld has made clear from day one his fear of a potential Trump presidency, just as he has made clear his policy differences with Hillary Clinton. The only candidate he is urging voters to support for President is Gov. Gary Johnson. Period.

“The wishful thinkers need to take a break and start wishing for something else because the Johnson-Weld ticket is not giving an inch to Donald Trump OR Hillary Clinton.”