Home › Politics › Even with Johnson’s gaffes, he remains the sanest choice for president over Trump or Clinton

Even with Johnson’s gaffes, he remains the sanest choice for president over Trump or Clinton

Coming off the recent endorsements by the Detroit Free Press and the Chicago Tribune, Libertarian presidential nominee Gary Johnson  remains “a practical alternative who shares the same values as many Americans.” Johnson is beating Trump with the number of major newspaper endorsement. Whereas Johnson has had three recent missteps on MSNBC, he has been racking up major newspaper endorsements and American support for his candidacy continues to grow. Johnson’s most recent misstep was expertly spun in his favor when he couldn’t come up with a foreign leader he looked up to. 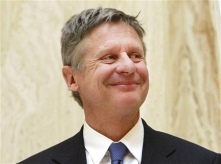 Johnson still struggles a bit in the polls nationwide, but in many states, he’s surging. A new poll out this morning, October 2, 2016, has Johnson at 24 percent in his home state of New Mexico. New Hampshire has Johnson at 13 percent, in Virginia he’s at 15 percent, and in Colorado he’s at 13 percent.

So, while both Clinton and Trump have a large amount of baggage, Johnson seems the sanest choice of the three presidential candidates who will be on the ballot in all 50 states in November’s general election. But many Americans remain fearful to vote Johnson as they feel they may be “wasting” their vote. Johnson says that voting for someone you do not believe in is a “wasted vote” and the Chicago Tribune states, “We reject the cliche that a citizen who chooses a principled third-party candidate is squandering his or her vote.” Many Americans are supporting either Trump or Clinton because they are against the other candidate, rather than being very supporting of “their candidate.” And yet, in Florida for example, most voters are grossly misinformed about the presidential candidate for which they will choose in November and a led by the mainstream media.