SAN JUAN CAPISTRANO, CA — A San Juan Capistrano resident is suing the city for violating the First Amendment after being fined for placing “For Sale” signs in his car parked on the street in front of his home. Palm Beach County, Florida has a similar ordinance which was recently enacted, violating the rights of its citizens in what the county commission calls “curb stoning.”

Michael Cefali is challenging San Juan Capistrano’s ordinance that forbids advertising a car for sale by disp[aying a sign in it when it is parked on a public street.  The law — San Juan Capistrano Municipal Code section 4-6.311 ( a ) — violates First Amendment free-speech guarantees that protect advertising, according to the lawsuit filed today in the U.S. District Court for the Central District of California. 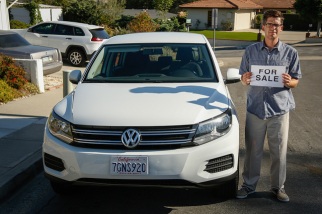 Cefali is represented free of charge by Pacific Legal Foundation (PLF), a donor-supported watchdog organization that litigates nationwide for limited government and individual liberty.  Assisting in the case are students at a PLF-sponsored litigation clinic program at the Dale E. Fowler School of Law at Chapman University in Orange.

“San Juan Capistrano is sideswiping First Amendment rights by forbidding people from using a simple sign to communicate that their car is for sale,” said Larry Salzman, a PLF Principal Attorney who is also a supervising attorney with PLF’s litigation clinic program at Chapman.

“The Supreme Court has repeatedly said that government cannot favor some messages over others based on their content,” Salzman continued.  “Yet that’s what San Juan Capistrano is doing by censoring ‘for-sale’ signs in parked cars.  If Michael had put a different sign in his car — a political sign, or an advertisement for a garage sale — that would be OK with the city.  But because his sign advertised his car for sale, he is being punished.  This kind of discriminatory restriction on speech collides with the Constitution, so we’re asking a court to strike it down.”

When Michael Cefali parked his late-model Volkswagen in front of his home on a residential street in San Juan Capistrano, he placed “For Sale” signs in his back window, hoping to attract the attention of potential buyers.

But instead of finding a buyer, he caught the attention of an Orange County sheriff’s deputy who issued a $50 ticket for violating the city’s ban on “Displaying For-Sale Signs” in vehicles parked on public streets.  Michael has been informed by city officials that the city routinely enforces this provision of the code.  He has paid the fine, but he is intent on challenging the ordinance as a violation of his and other San Juan Capistrano residents’ First Amendment rights.

“This case is important to me both for practical reasons and important reasons of principle,” said Michael.  “If I can’t sell my car in front of my own house, it’s obviously a big burden, because I have to move the car and park it in Dana Point, Laguna Hills, or somewhere else simply to let drivers know it’s for sale.

“But the principles at stake are just as important,” he added.  “I’m suing for my rights and, hopefully, to strengthen the First Amendment for everybody,” said Cefali, who is himself a recent graduate of the Fowler School of Law at Chapman.  “As someone who loves the Constitution and the Bill of Rights — and who studied them carefully in law school — I could not ignore the city’s violations when I became aware of them in a personal way, right in the pocketbook.”