Arlington, VA —On Monday, millions of Americans will celebrate the contributions that businesses and individuals have made to benefit the strength and prosperity of America’s economy. But for many other Americans who are locked out of the workforce due to arbitrary licensing, permitting or other unjustified regulations, Labor Day is another reminder that governments big and small continue to deprive them of their right to earn an honest living.

Yesterday, September 1, 2016, the Institute for Justice (IJ) launched its “IJ Asks Why” initiative to encourage entrepreneurs, regulator,s and others to question the underlying justification for laws that stand between entrepreneurs of modest means and their ability to climb the economic ladder. Through litigation, activism, and research, IJ Asks Why will hold governments accountable for infringing Americans’ right to economic liberty.

As part of the initiative, IJ is releasing “Open for Business,” a new report outlining seven 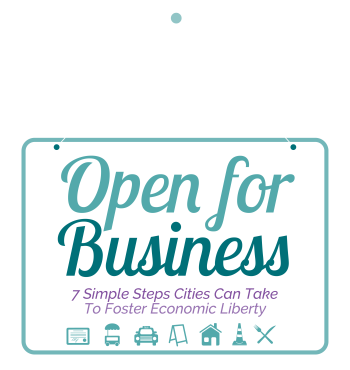 simple steps cities can take to foster economic growth by unleashing the transformative power of economic liberty. Economic liberty is the simple idea that all Americans have a right to earn an honest living. Unlike the grand plans and regulations that typify government-directed economic development, the report suggests that cities take a different approach. By reducing the barriers to entrepreneurship and eliminating unjustifiable economic regulations, local governments can unleash the creative potential of their citizens and empower individuals to put themselves to work.

The report recommends that cities:

“These seven suggestions are not meant to be exhaustive; they are instead meant to encourage municipal leaders to critically examine existing regulations by simply asking ‘Why?’ ” said IJ Senior Attorney Sherman. “Why is the process of starting a business so complicated? Why are some businesses insulated from competition in the free market? Why do we have this or that regulation? Often, this simple inquiry will reveal that existing regulations or processes are supported by no good reason and that we would all be better off without them.”

For 25 years, the Institute for Justice has fought to tear down these barriers to entry by persuading state and federal judges to take entrepreneurs’ constitutional rights seriously. Three recent IJ cases highlight the need to question the underlying justifications for regulations limiting economic liberty.

“Asking ‘why’ gets at the heart of how IJ’s litigates economic liberty cases,” said IJ’s Chief Operating Officer Deborah Simpson. “We ask why, and we expect answers. We ask courts to engage in truth seeking—to examine the underlying justifications for laws. All too often, we find that laws limiting economic liberty have only pretextual justifications with no rational basis for their existence other than preserving monopolies and limiting economic opportunity. It is precisely these circumstances where judges have a duty to stand up for Americans’ constitutional right to earn an honest living. ”

Like Loading...
‹ All Veterans Deserve to Hear Gary Johnson Speak At the IAVA Presidential Forum
Why are There Not Taco Trucks on Every Corner? ›