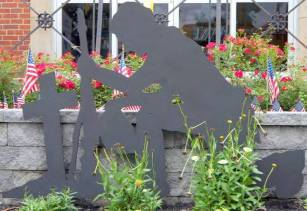 “By voting in favor of this religious display and ignoring the objections of local residents, the Borough of Roselle Park and the mayor are making litigation inevitable,” said Monica Miller, senior counsel of the Appignani Humanist Legal Center. “The Christian symbolism of the memorial and its placement on public property give the impression of government favoritism toward religion, in violation of the First Amendment.”

Roy Speckhardt, executive director of the American Humanist Association, added, “A memorial featuring a Christian cross excludes the immense sacrifices made by non-Christian soldiers. We hope the borough would instead consider an inclusive, religiously-neutral memorial honors all of our veterans.”

One week ago, the American Humanist Association demanded that the mayor remove the Christian war memorial from public land. The memorial, which depicts a soldier kneeling in front of a cross, was installed on July 29 by city employees with the mayor’s personal authorization. In response, citizens of Roselle Park expressed concerns that the memorial infringed upon the separation of church and state, but the display was not removed.