Home › Government › Which presidential candidate would save America the most

Which presidential candidate would save America the most

Trump has reiterated many of the policies he has already touted on the campaign trail, including construction of a border wall, tax reform, and boosting the military. He also announced a ten-point plan to reform services for veterans, advocated for school choice, and promised to fix the Transportation Security Administration. This week, the spotlight shifts to Philadelphia for the Democratic National Convention.  Stay tuned to CandidateCost.org for the latest cost estimates of the frontrunners’ platforms. Here is a table showing the costs of each candidate’s proposal costs as of today — it will change as more proposal are brought forth. CandidateCost.org is a project put together by the National Taxpayer Union Foundation. The National Taxpayer Union Foundation is a non-partisan research and educational organization dedicated to showing Americans how taxes, government spending, and regulations affect them.

As the table shows, Johnson has the most spending cuts of any of the candidates saving at least $143 billion and reversing the ever-increasing spending of the federal government. Sanders, Clinton and Trump proposals that would increase federal spending. They should heed the warnings in the Congressional Budget Office’s (CBO) latest long-term budget outlook. The national debt reached a new high last week, topping $19.4 trillion, and CBO foresees debt climbing further for the foreseeable future. Over the next three decades, federal tax receipts will grow as a share of the economy, but will be outpaced by a spike in spending, particularly for Social Security and federal healthcare programs. CBO forecasts that federal debt would reach 141 percent of GDP, far exceeding the 1946 peak of 101 percent. 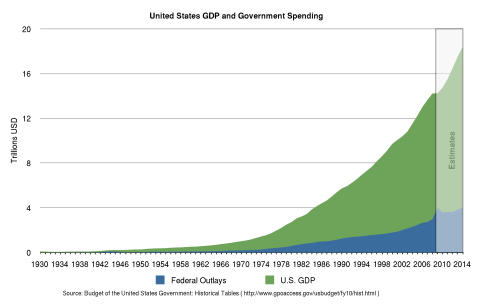 An outside analysis of the report finds that the level of debt is likely even worse than CBO’s prognosis. Freedom Partners (FP) observes that CBO’s long-term report does not include the intragovernmental debt in its calculation. Under their analysis, the total federal debt would equal 170 percent of GDP, 23.5 percent higher than CBO’s predicts. Yet both Clinton and Trump have vowed to block reforms to set Social Security on a path to solvency, whereas Johnson has suggested ways to reform Social Security so that safety net will be there for those that want it and need it. Read more here.