Home › Celebrity › ‘Tony Robbins: I am Not Your Guru’ private screenings in NYC and the Hamptons hosted by DuJour Media

‘Tony Robbins: I am Not Your Guru’ private screenings in NYC and the Hamptons hosted by DuJour Media 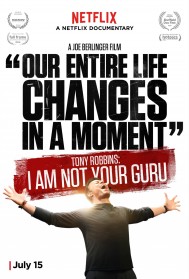 DuJour Media’s Jason Binn, Leslie Farrand, and Fiona Murray hosted a series of events from NYC to the Hamptons in celebration of tomorrow’s July 15, 2016, Netflix release of “Tony Robbins: I am Not Your Guru,” a film by Academy Award-nominated filmmaker Joe Berlinger. Guests sipped Peroni Nastro Azzurro, Smoke Tree Wines, and Gian Luca Passi’s Fiol Prosecco throughout the extravaganza, which was attended by Tony Robbins himself along with his wife Sage Robbins. Two days of events kicked off in NYC on Thursday, July 7. Director Joe Berlinger was also in attendance at a TriBeCa cocktail party, film screening and a chic after party celebration at Provocateur nightclub in the Meatpacking District.

On Sunday, July 10, the Hamptons set mingled with the entrepreneur, best-selling author, philanthropist and #1 Life and Business Strategist at an intimate brunch followed by a second screening of the film and cocktail reception at Parrish Art Museum in Water Mill. Attendees in both NYC and the Hamptons were treated to a post-film Q & A session with Robbins.

Academy Award-nominated filmmaker Joe Berlinger has been a leading voice in nonfiction film and television for two decades. His films include the landmark documentaries “Brother’s Keeper,” “Paradise Lost,” and “Metallica: Some Kind Of Monster.” 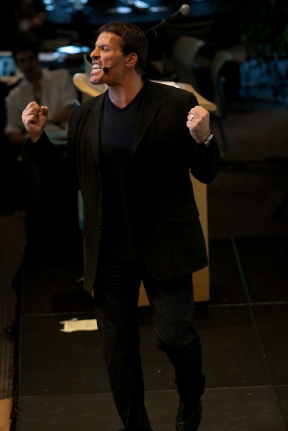 “I Am Not Your Guru” premiered on March 14 at SXSW, and will be released globally on Netflix on July 15.  The film is a visceral, concert documentary-style film that gives audiences a behind-the-scenes experience of one of Tony’s Date with Destiny seminars. Until this project, cameras had never before been allowed backstage at one of Tony’s events. Date with Destiny is a six-day live event with approximately 2,500 participants. Joe Berlinger attended a Date with Destiny seminar in 2012 and was moved and inspired to bring the transformative experience to audiences in the form of a feature documentary film. The documentary features Julianne Hough, Derek Hough, and Maria Menounos. Celebrities who have participated in past seminars include Oprah, Usher, and Anthony Hopkins. Netflix is releasing the film, which was a Radical Media and Third Eye Motion Picture Co. production.

Peroni Nastro Azzurro – Italy’s No. 1 premium beer – is a crisp, refreshing lager that exudes Italian style. Created in 1963 in Italy, Peroni Nastro Azzurro launched in the United States in 2005, and today is enjoyed across six continents. The iconic Italian lager has won over tastemakers and trendsetters looking for a crisp, clean beer that complements their style. The brand’s history, taste, design and partnerships with well-known Italian chefs, designers, and exclusive fashion events reinforce the beer’s stylish Italian heritage. For more information, please visitwww.peroniitaly.com
The vision of Smoke Tree is to craft wines that are bright in aromatics, minimal in oak flavor and refreshingly true to their varietal character. With our Sonoma County Chardonnay and Pinot Noir, we wanted to express the inherent beauty of Sonoma’s cool climate vineyards. To do so, we harvest our vineyards by hand and by plot, assuring the ideal level of ripeness for the final blend. We ferment slow and cool with minimal extraction and oak flavor. 2014 was our first vintage, and we are pleased with the results: two wines that are equal parts inspiration, elegance, and nuance.

FIOL is the 1400s Venetian slang used by the young to address the “cool guy” – this is really what we are looking for in our wine: a community of friends that shares the passion for wine and enjoys life with a sparkle. FIOL is not just the taste, the bubbles, the brand, it is the whole experience: from the case to the lush aftertaste. FIOL is a statement of a lifestyle, for someone looking for quality and passion, someone who has the freedom to choose an amazing drinking experience over just another name or label. FIOL comes from the Veneto region, the Italian region well known for its history and famous cities such as Venice, Verona and Treviso – the city has a standing tradition of cool people making and enjoying Prosecco.