Home › Crime › Libertarian Lurie out with statement on police shootings

Libertarian Lurie out with statement on police shootings

This morning, July 14, 2016, Artie Lurie, the Libertarian Party of Florida (LPF) challenger to
Democratic incumbent, Lori Berman for Florida House District 90 came out with the following statement regarding the recent police shootings:

Unnecessary victimless laws lead to unintended consequences. All of the encounters by police officers that have lead to the shooting deaths of law abiding citizens began by someone either being pulled over for some non-moving traffic infraction, or by stopping someone in the street that were causing no harm to anyone, but in fact were minding their own business, selling CDs or individual cigarettes that somehow violated some ridiculous law. I believe regulations that outlaw behavi

or is not just harmful but outright dangerous. It’s laws like these that mostly affect minorities and the poor. We need to put an end to the nanny state! In a free country, the only laws that are necessary are laws that outlaw the use of force (Assault, rape, murder) and theft of property. If elected, I would push for legislation that would repeal all non-violent, victimless offenses and for the release of anyone incarcerated for non-violent, victimless crimes.

The morning after the police shootings in Dallas, the Libertarian Party of Florida denounced the sniper attack on the police. LPF chairman said last week:

“We resolutely stand against the use of violence to achieve a political end. What happened in Dallas is a symptom of a bigger problem, which is that law enforcement has strayed from its primary mission of protecting the rights of all citizens. I call upon elected officials everywhere to restore that mission.”

“The killing needs to stop. All of it. None of these shootings were justified – not the shootings by the police, not the shootings of the police. The Libertarian Party denounces all killing. No American should feel they’ve invited violence upon themselves because of their skin color, the uniform they wear in service to their communities, or their decision to exercise their Second Amendment rights. None of these factors should make you a target for murder in this country.”

“The frustration in the black community is palpable, and frankly, justified. When rogue cop after rogue cop gets off scot-free after using excessive force and changes are not made, and consequences are not felt, it causes this horrible tension we are feeling today. However, the vast majority of the black community have been exercising their right to protest peacefully and admirably. It is despicable that a couple of bad actors put a cloud over all that and increased tension for everyone. The shooters in Dallas will see justice, but will the blue wall of silence ever be broken? Will cops ever start to do a better job of policing themselves?”

“The Libertarian Party calls for peace and justice. Those two things go hand in hand.” 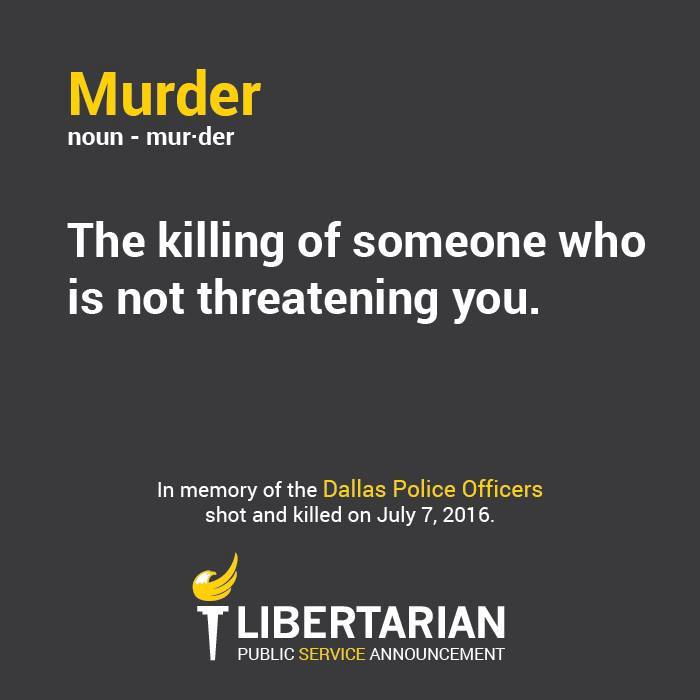